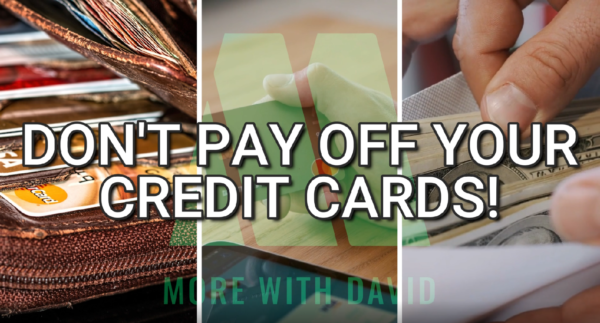 I want to address paying off credit card debt. Obviously, credit card debt can be a terrible thing to have. A lot of people get trapped in it. Maybe they get behind on their bills. Then they  use theirs credit cards to get by and find that the second situation is worse than the first.

I have a lot of people ask me, â€David, I’m about to get some money (a big bonus or a big commission or they flipped a house). Should I take that chunk and pay off my credit card debt?” This makes a lot of sense, right?  After all, this is what Dave Ramsey and Clark Howard teach.  However, I believe there is a better way to pay off your consumer debt.  Letâ€™s look at some numbers.

If this real estate investor wants to blow up his income and acquire rental real estate,  throwing $30,000 of his pay day at debt is a  big mistake.

So what would I recommend?

I would recommend  that he go to nerdwallet.com and find some balance transfer offers and try to get his credit card balances transferred into a 0% situation for 12 to 18 months. That will give him time to pay the credit cards off without losing money to interest.  Then he can take the $35,000 and purchase a rental unit or buy some assets that create cash flow. Maybe he could purchase a short-term rental.

I would expect a short-term rental to create $2000 a month net income.   Do you think he’d be able to pay off those credit cards now? Absolutely! But at the end of the day, the person who pays off their credit cards with their â€˜big chunk of moneyâ€™ is â€˜debt freeâ€™ but they no longer have the power of that $35,000.  In contrast, our guy got creative by restructuring his credit card debt, creates an asset that generates $2,000 a month, and can pay off the credit debt with ease.  When he is debt-free he still has the power of that $35,000 working for him in the short-term rental making $2,000 a month.

Look, the banks and institutions donâ€™t want you to be trained to do this.  They want to tell us to put money in savings, to pay off their credit cards. Because the credit card companies, they want their money, they love it when you pay them off. They want to take your $35,000 and make it work for them instead of you.  When you throw your chunks of cash at paying down debt you are losing the ability for your money to MAKE INTEREST.

So donâ€™t take a chunk of money and use it only to pay off debt. Instead, restructure the debt and buy assets that create income for you that can then pay off the debt and continue to put money in your pocket year after year.